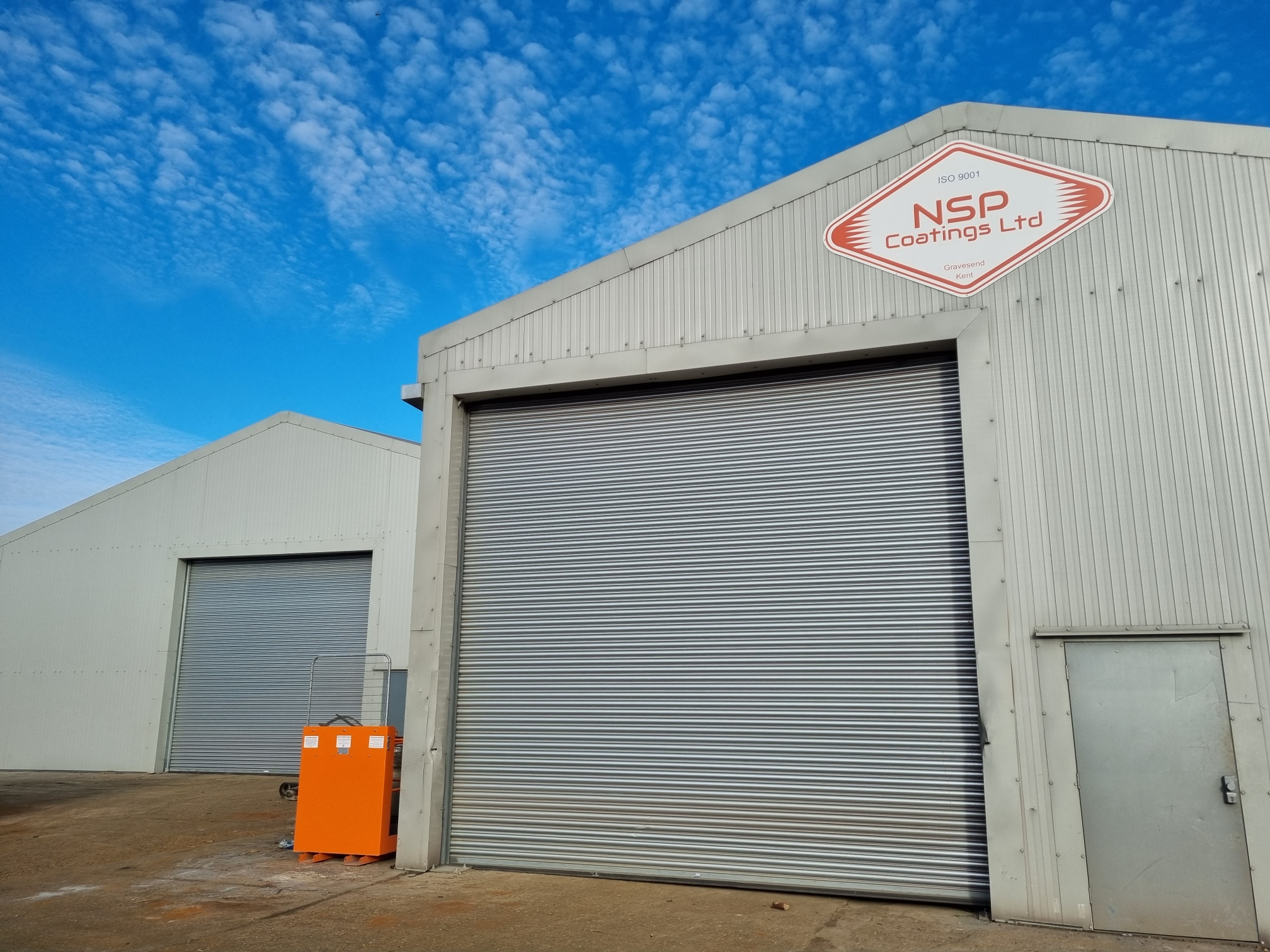 What is intumescent paint?

Intumescent paint is a passive protection fireproof paint and an effective way of protecting structural steel against fire.

Steel Intumescent paint is formulated to protect the sub straight in the event of a fire. When the paint exceeds its threshold temperature it expands up to 50:1 for thin paints (soft char) and 5:1 for thicker paints (hard char). This char then gives extra protection and thermally insulates the metal for a period of time from 30 minutes to 120 minutes, depending on the paint used. It is needed on load-bearing steels to ensure the structure’s integrity and provide valuable time to evacuate a building on fire. 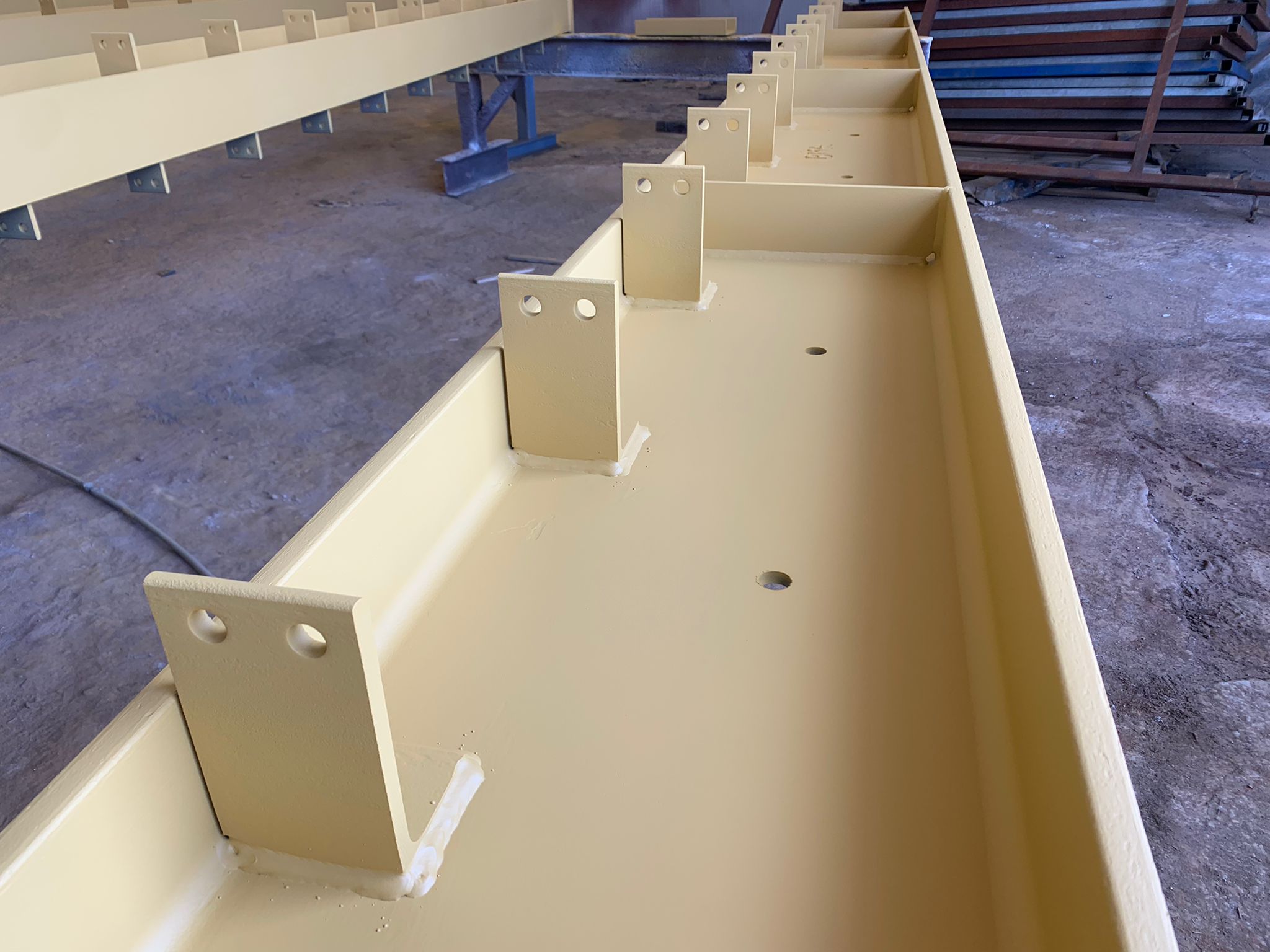 A beam in the process of being coated in intumescent paint

What are intumescent paints made of?

Ablative intumescent coatings have a large number of hydrates in them; when hydrates are heated (in a fire), they break down, and the water vapour is released, which has a cooling effect. When the water has fully evaporated, the material left behind is known as CHAR. Depending on the application of the paint used, there are two types of Char, soft and hard.

Let’s look at soft or light char; this is typically used in thin-film applications of passive protection and comprises a microporous carbonaceous foam formed by a chemical reaction. The chemicals are Melamine, Pentaerythritol and Ammonium polyphosphate. For the reaction to occur, it needs a molten binder, typically a vinyl acetate copolymer or styrene acrylates. When the paint is heated to the right temperature, the paint expands up to 50 times its size, forming the char and this foamlike structure insulating the structural steel. The pressure from the expansion is low as its job is to create a protective layer over the item. This slows down the heat transfer and extends the amount of time the item is stable for.

Hard Char is like soft char in its makeup, but sodium silicates and graphite are added to make it fast and more robust in the expansion stage, but it only expands to 5 times its size. When applied to plastic pipes, it can be used as a fire stop as its aggressive expansion can squash the pipe and shut off any route for the fire to spread in the pipe. Hard Char products are typically used in exterior applications and are unsuitable for interior spray fireproofing.

What is the British Standard for intumescent paint?

Intumescent coatings for steel constructions must be approved in standardised fire tests.  the British Standard is BS 476-20/21, and the European Union is EN 13381-8 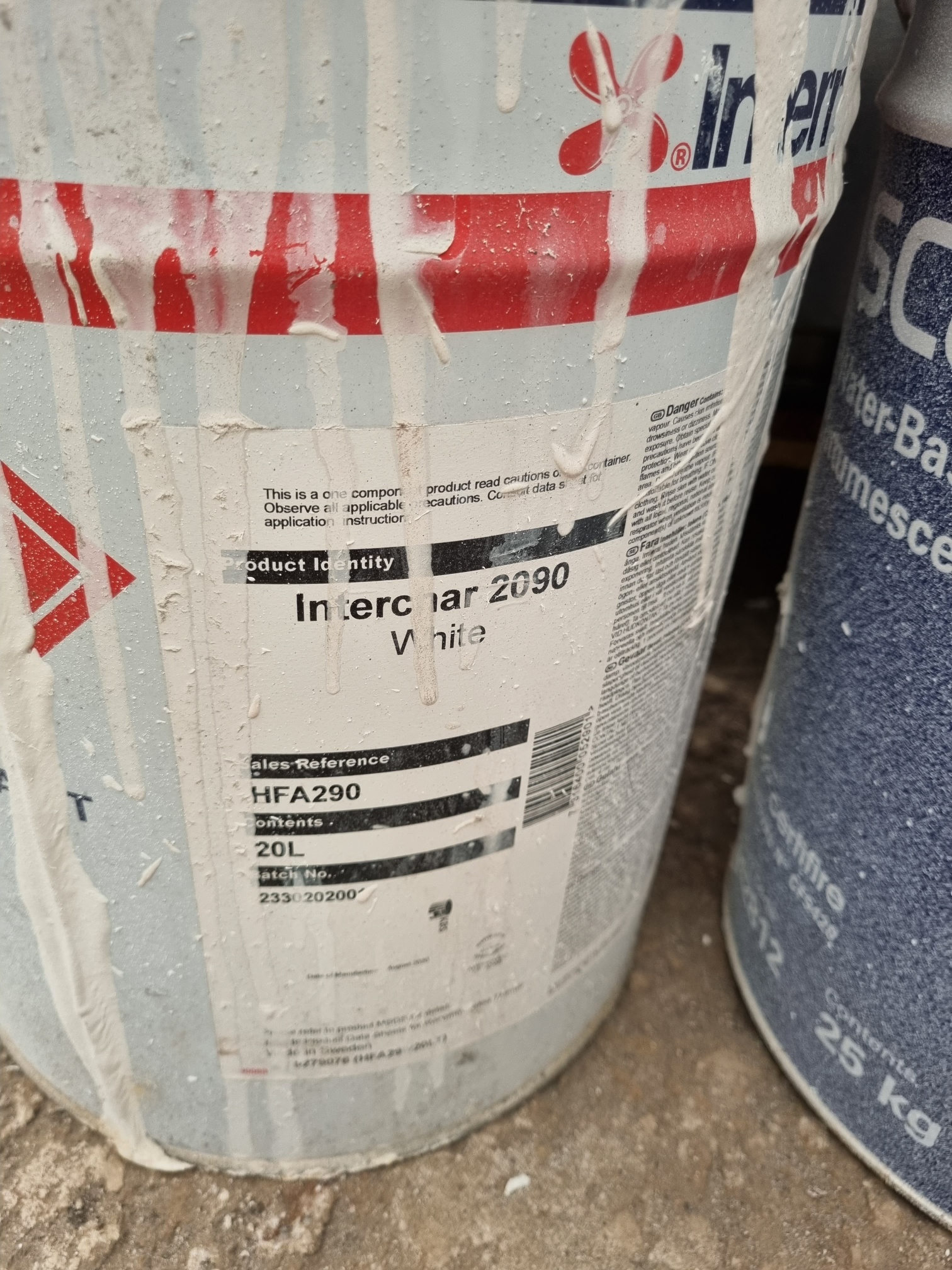 At what temperature does intumescent paint react or activate?

How long will Intumescent paint protect for?

Paints are rated according to how long they can protect at temperatures of 250 degrees centigrade; this is the point at which endothermic reaction occurs.

Typically, they are categorised in 30,60,90 or 120 minutes based on the maximum time that paint will provide effective fireproofing against this extreme temperature.

What is intumescent paint used for?

Intumescent paint can be used to protect a variety of materials, the most common is structural steel, but you can also coat and protect timber, concrete, and even composites.

How are intumescent paints applied?

Applying intumescent paints is usually done with airless spray paint equipment but can be applied with a brush roller. It is essential to follow the manufacturer’s application instructions. When applying intumescent spray paint to steel, it is usually done using airless paint equipment to give an even coat thickness. The right dry film thickness must be achieved to ensure the fireproof paint will perform as required. 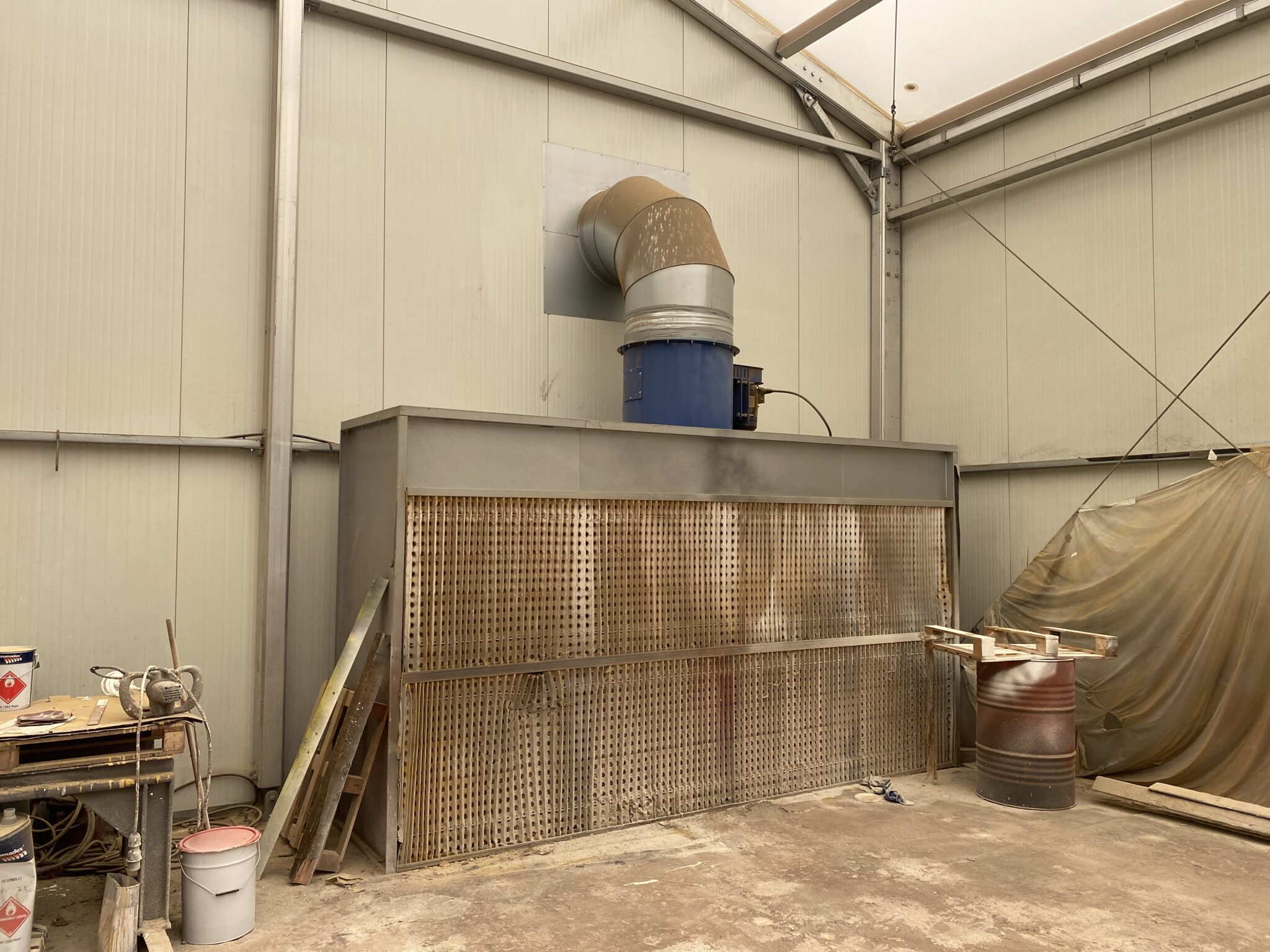 Technology in recent years has improved, but fire retardant paints can still be toxic.

It is advised that you check the product safety sheet carefully. A good tip is to check the MSDS; the material safety data sheet was prepared independently and not by the manufacturer.

Generally speaking, most intumescent coatings release toxic fumes when burnt, and some can leak toxins into the air, especially in hot and humid conditions. Some modern paints have low VOC once the paints have cured.

However, they are not all equal, and it’s worth checking with the individual supplier. 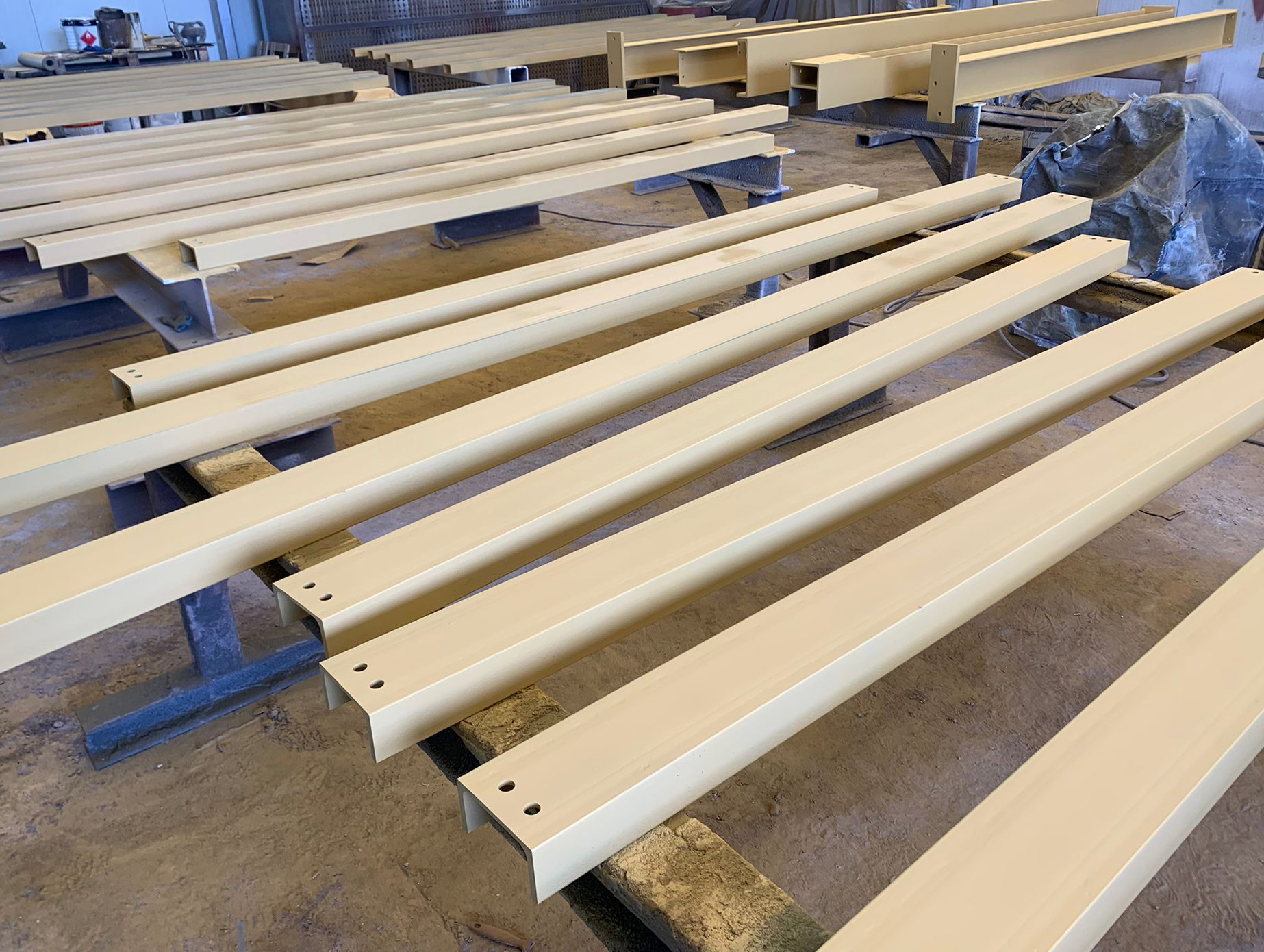 All the component parts getting the first intumescent coat

Find out how we can manage your collection and delivery.

What is shot blasting?

What is wet paint spraying?

What is powder coating?